Genetic variation means the following – there are various variants of gene abnormalities within a population or an individual. Each specific fish has only two copies of each gene, so it can have a maximum of two gene variants. However, the population or breed of the fish as a whole may have many different variants of each gene. If not all of the possible gene variants are inherited by the next generation, the breed loses its gene variability. In fact, all breeds of guppies that the breeder keeps without introductory crossing will lose gene variability for a long time. What does it matter, you ask, only one thing – the goal of breeding a guppy is to have the breed able to demonstrate the same characteristics over and over again, and all the fish of the same breed are as close to each other as possible. In some old articles on guppy breeding, you can read that the quickest way to get a pure breed is to closely interbreed (inbreeding) the most brightly colored individuals. All this in order to get a homogeneous fish in the next generations. The advice is correct if you want to get a pure breed. But there are also very disadvantageous effects of closely related crossbreeding. Here they are: reduced survivability; fertility decline; propensity to disease. To some extent, these effects can be reduced if the breeder chooses the most healthy and prolific guppy specimens as parents for the next generation.
Loss or reduction of fertility, for example, is the typical and widespread effect of closely related crossbreeding that most breeders experienced. Such a breed may have a very low fecundity, and then suddenly, in one of the generations, the very possibility of the continuation of the genus will most likely disappear. Weak immunity and low disease resistance, this is another problem of breeds supported by inbreeding. If the breeder, from whom you take the fish, recommends using salt, formalin, potassium permanganate, a wide range of antibiotics, and claims that all this is necessary for the guppies to survive in new conditions, you might think that he is wrong, and all this is a mistake , but in fact this is exactly how things are. Another undesirable effect of the loss of gene variability is that the breeder cuts the branch that he supports. Thus, genetic diversity is a prerequisite for breeding. If there is not enough genetic diversity, then there is no point in breeding. Then the question arises: how many variations are lost in each generation, and how long can we maintain the color of the fish without introductory crossing, but without serious effects? The answer depends on many factors, but here are two of them that are of paramount importance: the number of individuals used for breeding in one generation is very important and the number of males or females of guppy intended for the cross is outweighed.

The number of individuals for breeding

From this table we can see that if we take the loss of half of the gene variations as an acceptable value, then you can cross within the line (inbreeding) for 2 generations, if there are only 2 individuals, then you need an introductory crossing to restore the number gene variations. This means that you have one introductory crossing per year. If instead you use 30 individuals in each generation, then you can do without “fresh blood” in the line for more than 40 generations or about 20 years! But this is in theory, in practice, the breeder is very often limited in the number of aquariums and cannot contain such a number of fish. The table shows that the best option would be to maintain 10-20 breeding individuals in each generation, and this is quite possible for most guppy breeders. 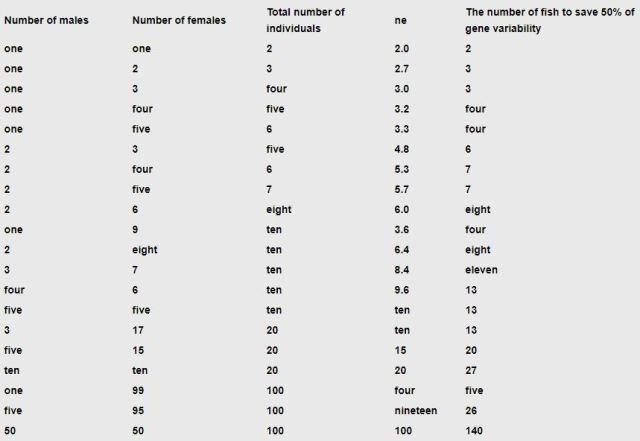 The table shows that a breeder using 50 fish of one and 50 fish of the other sex with a cross, in one generation, can keep the line for 140 generations or approximately 70 years and at the same time keep 50% of gene variations in the line! This is possible with commercial breeding, but not at all realistic for the average amateur. The table also shows that the effective population size ( ne ) cannot be greater than the total number of fish involved in the cross. On the contrary, it may be much less, but vice versa never. A small bias in the sex ratio does not matter much, but at a ratio of 1: 3 and more, there is a significant loss of gene variations.

Variations first or where to start

Prior to that, we considered how much gene pool we can hold, for how long, and under what conditions. But if you initially start with a limited amount of source material, then it will be impossible to keep the line for as long as possible. When receiving a new breed, you should take as many individual individuals as possible and try to use them all in the cross to get a new generation. So, if you have the opportunity to purchase 10 – 20 young fish, this is a very good start. Getting a pair or a trio from a line already using inbreeding is not a good start. And yet, the latter option is not so rare, especially among beginners. Very soon they begin to encounter various diseases and infertility in fish. Sometimes you simply have no choice and are forced to purchase a limited number of guppies, for example, this can happen during auctions after exhibitions. In this case, it will be better if you try to buy guppies from different lines (from different breeders), but the same breed and with a minimum number of differences. It would be even better if you refuse to purchase an auction fish at all, but instead make personal contact with the breeder and take more good, young fish from him but later, after the auction. Displays, it is always stress for the fish, the same equipment is used in a large number of aquariums, it is very likely that the fish can pick up the sores carried by this equipment from other aquariums. If you take fish from a breeder, try to take it from someone who says that makes occasional introductory crossing, from time to time, adding “fresh blood”, and not from the one who brags about the cleanliness of the line and the preservation of color forever and ever. An additional way to get more gene variation is this: when buying, try one of the females in the trio to be fertilized by another male, but not by their brothers. It is very good if this female is fertilized by several and possibly different males. Also try to get females from different litters, and, if possible, generally from different lines. By following these recommendations, you will receive the maximum possible amount of the gene pool from the former breeder.

Breeding lines
The general practice of guppy breeding dictates the following rules: Contain the maximum possible number of lines and cross them together at different stages. Keeping multiple lines is not a magical way to avoid the loss of gene variation. Different lines are closely related, and the gene variations in them are lost, regardless of whether many of these lines or few. However, spreading three lines, you use 6 individuals in each generation, even regardless of the possible bias in the sex ratio. This is better than breeding one narrow line (minimum two individuals), because the effective population size (ne) is large in the first case. With the content of several lines, the breeder can also focus his attention on some specific signs in each line, be it the shape of the fins or the intensity of body color, for example. Another way is the preference of one big line to several small ones. If a breeder sees that in a cross, in a large line, a sufficient number of individuals in each generation participates, and the sex ratio is approximately equal, then the content of one large line rather than a few small ones seems quite reasonable. The most common mistake here is to use only a few males and a large number of females in the cross. Using a larger number of males, the desired result is easily achievable, in a large group, each female will easily choose the most suitable partner. In practice, the utility of choosing a male by a female has been proven. If you give the female the opportunity to choose a male, this will cause a general positive effect. In particular, the fecundity of the female will increase and the health of the fry will be enhanced, but this is a topic for a separate article.