Genotypes with full or reduced synthesis of given color are build of four parts:

“Grey” guppy has full synthesis of all 4 colors.
It’s genotype will be: MMGGEEXX.

“Blond” guppy will have reduced melanine synthesis.
It’s genotype will be: mmGGEEXX.

We can as well made a crosses with other colors (which will rise numbers of possible outcome genotypes and phenotypes). In case of base body colors we have 2 alleles (number of alleles in a gene) to power of 4 (number of traits). The result is 16 different base body colors.

“The more recessive color genes in genotype, the lower number of all pigment cells”.

For a breeder it means two important things. Firstly all colors are depending on each other. For example a MmGgEeXx genotype with 4 recessive alleles will makes the fish less colorfull than genotype MmGGEeXx because of lower total number of pigment cells – not only those affected by recessive alleles.

Vladimir Storozhev during his over 30 + years of guppy breeding experience has noticed another very important corelation – shape of a tail fin depends on pigment cells (so he say that base body color has an influence on shape of tail fin) . 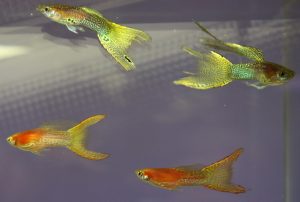 So in more useful for a breeder words. Some base body colors will help maintain desirable tail fin shape others won’t or can even make it harder or impossible. One have to remember about surface and over surface colors (there will be article about them in a future) – like for example half black. They also contribute to pigment cells size and distribution and are inherited independently to base body colors. In addition Storozhev says that there are no tail fin shape genes and he describe only two kinds of tail fin. Short, colorless tail fins – like for example in wild guppies and colorful tail fins. Arrangement (distribution?) of pigment cells on tail means it’s shape. Colorful short tail is a combination of a colorful long tail and one of a shortening tail fin gene (magenta, glass belly, panda and pink). True difference between common theories about different tail fin shape gens and Storozhev approach reveal itself in a cross between two different tail types. In a second generation we do not receive (according to Mendel laws) two basic tail shapes with new blood but we receive intermediate forms between one shape and the other and we have to select further for a proper shape. It confirms in my opinion Storozhev approach about lack of tail shape genes. Genes do control distribution of pigment cells and that is what a breeder should focus on in his selection of a perfect tail fin shape.

There is of course an exception, Snakeskin gene can have any shape of tail fin.

Spread angle of a tail fin is an autosomal recessive gene which can be positively selected.

Body of a guppy is divided into 3 regions which are colored independently. Fore body, peduncle and tail fin. Even in a case of genes which seems to colors full body – like snakeskin. So for example you can achieve snakeskin only on a tail or only on a peduncle. So possibly have any tail fin shape if it is a snakeskin. Worth checking with half black and sword tail.

So having in a consideration a base body color influence on a tail fin shape and few above facts a breeder receive a simple and what is the most important complete theory about guppy selection.

In the drawings presented below shows color polymorphism (phenotypic differences) male guppies for genes located in the X- and Y-chromosomes (in brackets the chromosome (s) on which is meets both gene).

Dedicated to the Fancy Guppy Hobby!
View all posts by Igor Dusanic →
This entry was posted in Guppies anatomy & genetics, My Blog (by Igor D.), X file and tagged color genes in genotype, Genetics and breeding of fish, guppy color genetics, Russian Base Body Colors, Vladimir Storozhev, VS Kirpichnikova. Bookmark the permalink.