The first Half-Black Pastels came from a breeder
in Germany (Frankfurt/Main), Mr. Gerhard Gellrich.
He shipped his new strain to the U.S. sometime around the end of the sixties.
At the same time he shipped some to Japan.
The modern strains have descended from these originals. 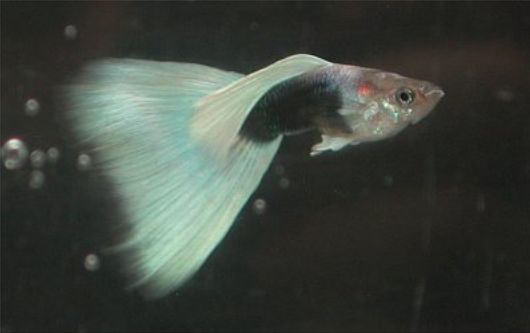 This HB Pastel was part of a tank entry that won first place in an IFGA show.

The Half-Black Pastel may have originated out of Europe,
but its huge size and spectacular, showy fins were developed in America.
It is a favorite among breeders in North America.
A single tank of Half-Black Pastels can draw eyes from across the room.

The IFGA Half-Black Pastel is basically a grey half-black guppy
with white leucophores in its fins.
There are blue iridophores in the fins giving them a pale bluish tone.

The IFGA Half-Black Pastels have perhaps one of the tightest and most stable genetics.
They are often used in crosses because of this.
However, ironically, they are not easy to breed
because the purity of the pastel color on the fins is easily lost.
In the picture accompanying this article,
you can see some of the red and orange tones just beginning to show up.
An American breeder of this strain,
Bill Klein, devotes a huge number of tanks to the strain.
He reports that the percentage of good breeders
coming out of a drop is extremely low, less than 5%.
This has also been the experience of the Philip Shaddock.
The American breeder and Half-Black Pastel champion, E.T. Mellor,
has tried to improve his line with a Japanese Half-Black Pastels.
However there was a loss of size in the cross
and by the time the size was regained, the Japanese influence was lost.
In his American line, E.T. Mellor also found spots on the fins to be a problem.
He selects males without the spots.
Other breeders have reported clear areas showing up in the dorsal.
Another problem plaguing many Half-Black Pastel lines is infertility
and a decrease in size after a couple of generations of close inbreeding.
E.T. Mellor,
for example, typically gets a maximum of three drops from his breeder females.
Some females prove to be infertile.
Some breeders use the Gold (gg) Half-Black White to increase the size
and fins of their grey-bodied lineand to fix the fertility problem.
A Gold (gg) Half-Black White male is bred to a grey Half-Black Pastel female.
This produces washed-out offspring.
The best of the males are selected from the cross
and bred to Gold (gg)Half-Black White females.
This is said to produce a bigger, more vigorous line.
Half-Black Pastels benefit from a good line breeding program.
At a minimum keep two lines going,
crossing brother to sister for three generations and then crossing the lines.
When selecting male breeders,
the largest bodied males are not the best choice as they often have fertility problems.
Use the largest females to maintain size.
The Half-Black gene is most often found on the X-chromosome.
The half-black pattern on IFGA strains
often is “converted” to leucophores
in some European or Japanese strains.
The leucophore pattern is usually Y-linked,
although X-linked versions have recently appeared.

The Half-Black Pastel male is sometimes bred to lace Snakeskin females
with the snakeskin pattern on the X-chromosome.
This produces Half-Black AOC offspring with poor spotted patterns.
The American breeder Luke Roebuck prefers to do the cross the other way.
He suggests the lace snakeskins are preferable to those showing the Cobra pattern,
as the lace pattern is more recessive.
“A good Russian Metal Lace may be even better
because the metal head would control the surface area
expression of the half-black color to about 50%, which is desirable.
“Luke” is referring to the member of the Moscow family
that has the Moscow blue on the front part of the body
and Snakeskin pattern on the second.

Source of information is; ‘ Guppy Wiki ‘ – All rights reserved.