What are Moscow guppies???

This time I had to make some corrections and deny few of my statements?!
Also, this will be my final word on this topic.

All the articles mentioned in this article
are now linked and available for reading.

After many years of research, chats with breeders from around the world,
collected records (published and unpublished articles), etc.
found it out that the first ‘Triangle/Delta’ Moscow were Half-Body Snakeskin
with ‘metallic’ blue head?

This fully explains streaks and dots in the caudal and dorsal fin
(due to a Y-linked gene) seen on the (modern) Moscow guppies today?
However, when most people think of Moscow guppy,
they think of solid blue & full colored guppy.
This strain is originated in Moscow, Russia in the early 80’s ???
when featured in “Freshwater and Marine Aquarium Magazine” (FAMA)
as Moscow Blue guppies?

They were distributed to Germany and Japan
and then spreading around the world from there?

The strain first appeared in USA in the 3rd World Guppy Contest
in Milwaukee in 1998 shown by a Japanese breeder.
Some of the 1998 WGC Show-Winners were purchased in auction by USA breeders
(including Luke Roebuck)…

One of the best (if not best) ever Russian guppy breeder
Vladimir Storozchev, and many other Russian breeders
when talking about Moscow guppies
they do not talk about Blue (Green, Purple nor Black)  Moscow?

So do not let me to confuse you
(even more than you are confused now as you read this article)
with my statement about “Blue Moscow” guppies???
After researching all Russian (and only Russian)
tropical fish websites, guppy clubs, forums, blogs, etc.
I came to the conclusion
that none of the Russian reputable guppy breeders
do not call “Solid Blue” [Triangle/Delta] guppy – MOSCOW BLUE!
Just a couple of beginners in the aquarium hobby
has published pictures of guppies that are called the Blue Moscow!

FROM ARTICLE;
Close to the false Muscovites are the Moscow blue selections of YA Levitsa.
This is an excellent breed, which has the widest tails of blue color.

ALL PATTERNS / MARKS ON MUSCOVITES & MOSCOW
ARE DESCRIBED IN THE ARTICLE,
THEIR POSITION AND COLORS, etc.
PERHAPS THEY FORGET TO MENTION BLUE HEAD,
SHEEN COLOR WICH COVERING ENTIRE BODY ???
I DON’T THINK SO (it’s absolutely unnecessary to clarify why)!!!

In one of the coming articles
I will post the original images with the original names
from one of the best ever Russian guppy breeder;
Vladimir Storozchev.
Also, I will republish [for educational purposes]
(original version as well as a translation in English)
1971 article on the “Veiled Moscow” (in English & in Russian),
N. Vasilev and F. Polkanov talk about the true and false Moscow.

All the collected data indicate that Vladimir has created new genotype,
(the new gene / supergene) from which many new varieties were created.

However, since the whole world has accepted the name
“Moscow Blue”  for guppies with particular characteristics / color
I will continue to represent them by that name in this article.

I’m not saying that the blue and purple guppies are same,
neither genetically nor in any other way
but Moscow? guppies, they are same … 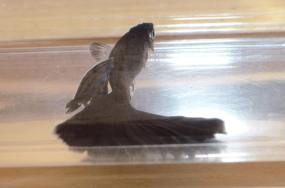 Green Moscow is Blue Moscow with a lot of yellow color cells
in the top layer of the skin. 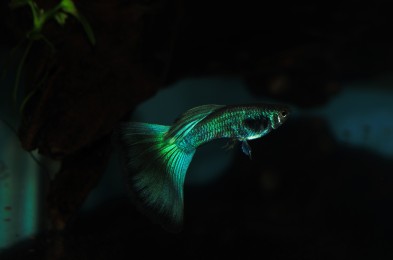 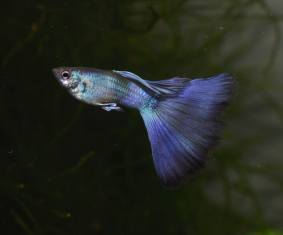 They could look Blue, even Black, Green or Purple!
If you are planning to put them on show bench, GOOD LUCK!!!

NOTE:   This strain is not fully mature until 10 months of age.

“Some breeders have even developed the (modern) Red Moscow ???“.

My question about Red Moscow was posed to Dr. Sergey Apriatin;
1.) Is it possible to made
Red Moscow Guppy with a “red head” FULL RED MOSCOW ?
2.) History of the origin …
when the species originated, who is the creator … ?

Answer from Dr. Sergey Apriatin;
1.) American/European/Asian Full Red and Russian Full Red
have difference understending of these phenotypes.
Russian Moscow Full Red have about 70-80% of Red color on the body and fins.
Your opinion is 95-100% of Red color for Full Red strains.

So, Luke Roebuck was correct with his statement;
“The definition of Moscow cannot have redhead”.
Red color is a pigment chromatophore color.
Moscow head is defined by Metallic
with sometimes irridocyte color which is in all blue green and purple …
they are not primary chromatophore color.

Moscow Red is Red guppy with Gray Base body color and Moscow super-gene.
Moscow supergene have a few different phenotype points (few genes).
One of them – big spot on the front of the body (no red color).

After that I mean were recieve a lot of Full Red strains
with different Base body color genotypes and phenotypes. 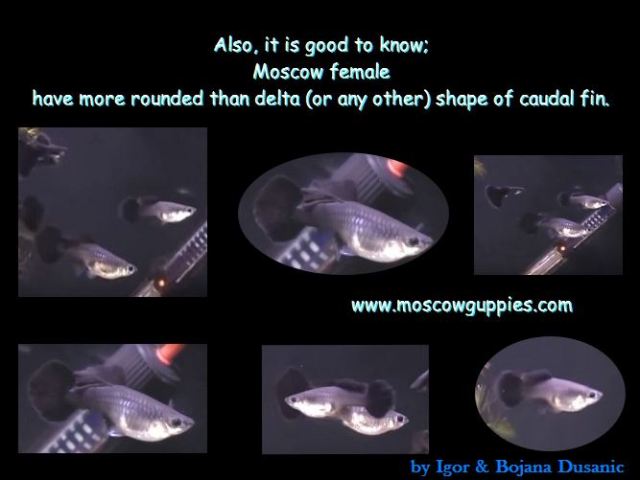 Mature chromatophores are grouped into subclasses based on their colour
(more properly “hue”) under white light: